You are here: Home / About

History and origin of The News-Gazette

Origins of the newspaper can be traced back to the Urbana Union, first published in 1852. Over the next 70 years, the paper went through several name changes and mergers. The modern News-Gazette was established in 1919, when David W. Stevick, owner of the Champaign Daily News, purchased the Champaign Daily Gazette, merging the two papers.

Mr. Stevick was an active voice in the community. He enthusiastically promoted civic causes, and sharply criticized activities that he felt were not in the public interest. His goal was simple: Get things done. “Be a Booster . . . And a Builder” was one of his famous editorial slogans.

Following Mr. Stevick’s passing in 1935, his widow, Helen M. Stevick, served as president and publisher for more than three decades. Under her guidance, The News-Gazette continued its internal growth and progress as well as expanding its community involvement.

In 1952, the paper celebrated its 100th year of service with a Centennial Progress Edition. In that issue, Mrs. Stevick said in a special message to readers: “A century of service does not offer a resting point. It challenges new achievement. It commands new and even greater toil and intelligence in leading Champaign-Urbana and East Central Illinois forward.”

An expansion program in 1965 saw the construction of a new press building to house a high-speed rotary press, the broadening of news content to appeal to a wide variety of readers, and the introduction of a Saturday morning edition, making The News-Gazette a seven-day-a-week publication. Technology has shaped the progress of the paper. In July 1977, a new offset press made possible improved print and color reproduction.

The original Downtown location was at 48 Main Street and in late 1984 The Stevick Building at 15 Main Street was completed to provide more space for the increasing number of employees.

Since David Stevick’s death in 1935, Mrs. Stevick and Mrs. Chinigo (Stevick’s daughter) carried out his wish for the newspaper to remain locally owned and locally operated. Through many challenges and lucrative offers the paper has remained independent – responsive and responsible to its community. Mrs. Chinigo assumed the leadership of The News-Gazette after her mother’s passing in 1967, until her own passing in 2002 – the same year the paper celebrated its 150th anniversary.

As an only child with no heirs, Mrs. Chinigo made elaborate plans to ensure that the newspaper would not be sold to a major corporation. Stock of the company had been put into a living trust with Mrs. Chinigo as primary trustee. Plans called for the trust to transfer ownership to a charitable foundation – The Marajen Stevick Foundation.

The News-Gazette has striven for journalistic excellence, as well as active involvement in the community. The newspaper and its staff have been the recipients of numerous awards for outstanding reporting, feature writing, photography, commentary, advertising and design. 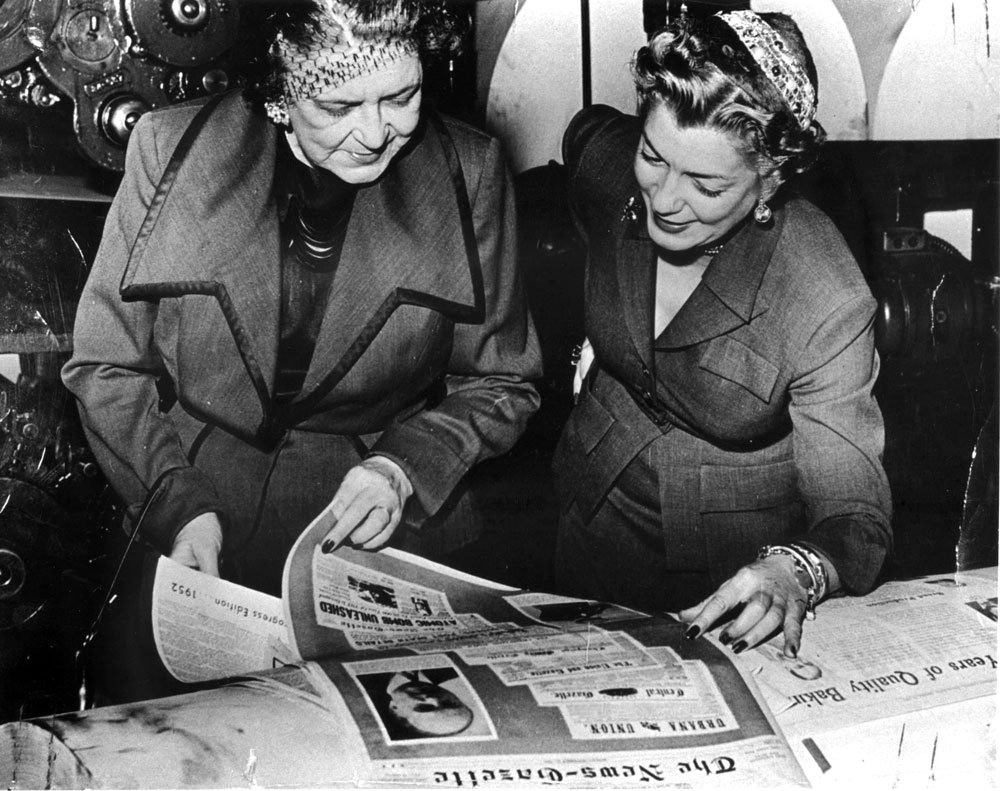 Then publisher, Helen Stevick, and her Daughter, Marajen, read the “Centennial Progress Edition” of The News-Gazette, in front of the old printing press. The News-Gazette celebrated 100 years of printing news in East Central Illinois in 1952. 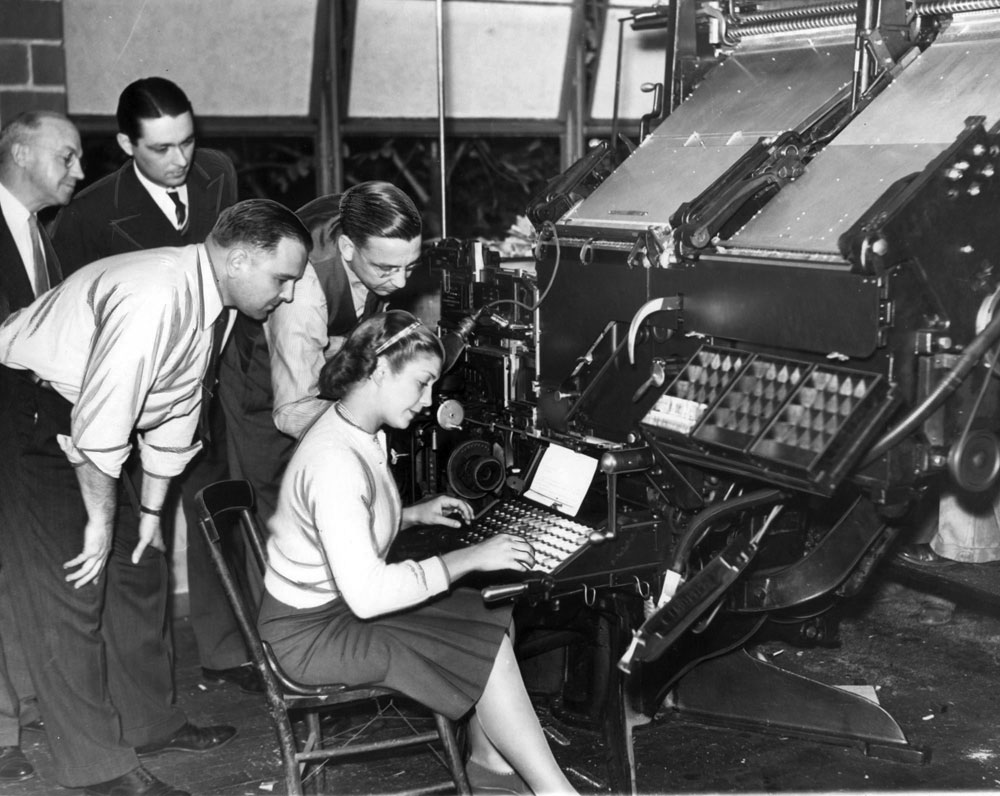 A young Marajen Stevick Chinigo learns how to operate the linotype machine that was used in the press room in the original office at 48 Main Street, in Champaign.

WDWS, named for its founder David William Stevick, began life on January 24, 1937. In the beginning, WDWS was a 100 watt, day time only station that broadcast from studios located on the 2nd floor of The News-Gazette building at 48 Main in Champaign. The transmitting tower was located just off the corner of Neil and Kirby Avenue in Champaign. In 1948, the station and tower were moved to the corner of Neil and Windsor. In 1961, the power was increased to its current 1,000 watts.

WDWS broadcasts 24 hours per day and is located on the AM dial at 1400. News, Information and Sports is the format for WDWS. The station is known as the voice of the Fighting Illini, as well as begin the local affiliate for various sporting events in the Midwest. We originate local talk shows as well as nationally syndicated talk shows. Today it is knows at NewsTalk 1400 WDWS-AM.

Sister station, WDWS-FM, was licensed in 1964 and took to the air waves in December 1948 as a 27,000 watt station. In 1971, the power was increased to its current 50,000 watts. The call letters were changed on November 1, 1988 to WHMS in honor of Helen Marie Stevick, spouse of WDWS founder and mother of the stations then-current owner Marajen Stevick Chinigo. WHMS is located on the FM dial at 97.5. WHMS is more popularly known as Lite Rock 97.5. The station is a 24 hour music station that plays a combination of classic and current rock like Adele, Celine Dion, Ed Sheeran, The Eagles, Taylor Swift and more. The station only interrupts the music format in order to broadcast the University of Illinois Men’s Basketball and Football games.

For over 22 years, WKIO was an iconic radio station and a leader in the Champaign-Urbana entertainment arena, then went away. However in 2013, WKIO saw its rebirth, with a different corporation, but under the direction of the same programmer, Mike Haile, who made WKIO a household name. You’ll find Classic Hits 107.9 WKIO the best collection of rock and pop music from the 60’s, 70’s and early 80’s. 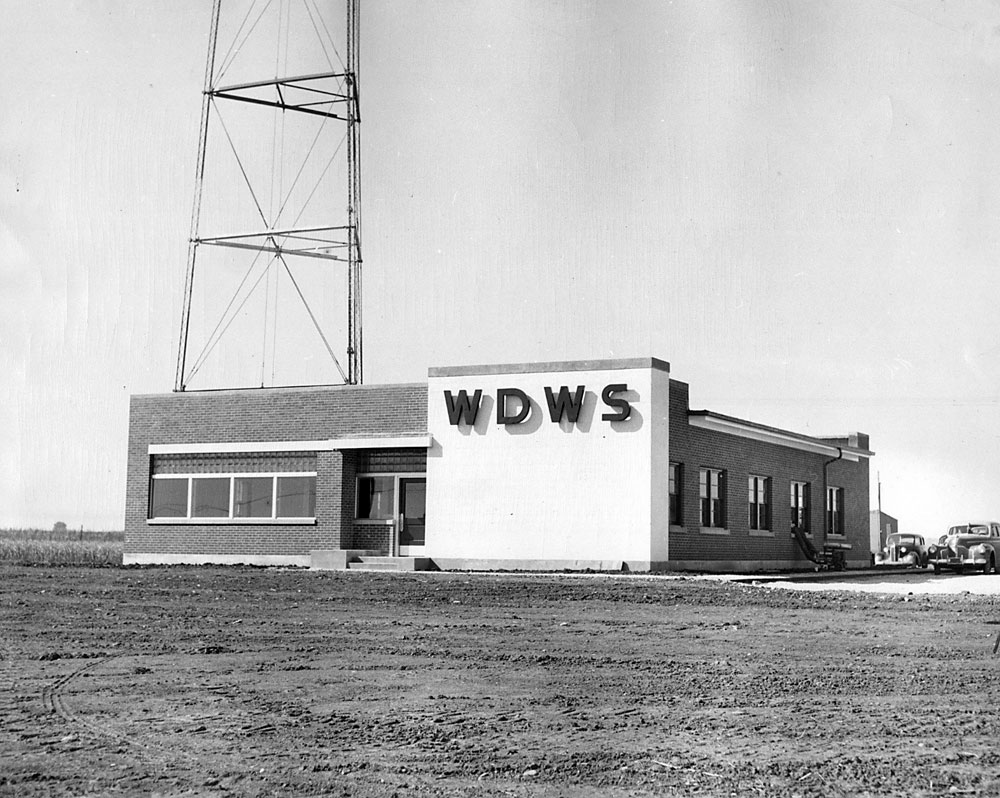